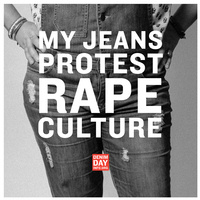 Join us in celebrating the 20th Denmi Day on April 24th. Wear Jeans with us! For the past 20 years, Peace Over Violence has run its Denim Day campaign on a Wednesday in April in honor of Sexual Assault Awareness Month. The campaign began after a ruling by the Italian Supreme Court where a rape conviction was overturned because the justices felt that since the victim was wearing tight jeans she must have helped the person who raped her remove her jeans, thereby implying consent. The following day, the women in the Italian Parliament came to work wearing jeans in solidarity with the victim. Since then, wearing jeans on Denim Day has become a symbol of protest against erroneous and destructive attitudes about sexual harassment, abuse, assault and rape.

Great way to promote denims, as somewhere they are banned, always nice to see such events.
Note to readers: Get instant Quickbooks payroll support 24*7 & 365 days, and solve your query via remote access. Explore more on: https://qbproadvisor.org/quickbooks-payroll-support/

The data, which is an estimate based on household surveys, shows 31.2 million people were actively looking for jobs in February this year. It did not have a breakup for engineering or technology graduates. Here is the opportunity for Jobless engineers https://www.fieldengineer.com/blogs/four-easy-steps-get-job-done-field-engineer-infographic

I’m excited to see the event about the undergraduate showcase. Adding to the event I want to introduce a freelance global marketplace connecting more than 35000+ talented engineers across 162+ countries. To reach visit @ https://www.fieldengineer.com/skills/comptia-server-plus