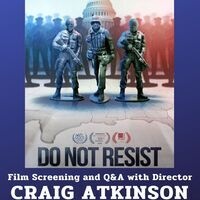 Do Not Resist film screening followed by Q&A with Director

Loyola's National Lawyers Guild and ACLU Loyola are hosting a screening of the award winning documentary Do Not Resist followed by a Q&A with the director Craig Atkinson. Do Not Resist won the Tribeca Film Festival best documentary in 2016 and was featured on PBS's POV documentary series.