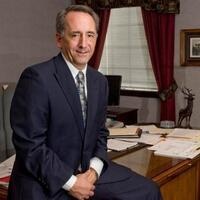 The Challenge of Corporate and Institutional Greed with Senator Joe Dunn

Join American Constitution Society for Law and Policy (ACS) this Thursday in conversation with Senator Joe Dunn about the challenge of corporate and institutional greed.

Senator Dunn began his career practicing law, handling products liability litigation involving defective medical devices and pharmaceuticals, as well as environmental cases. Senator Dunn was a member of the California State Senate from 1998-2006 where he chaired the Senate Judiciary Committee. He received international acclaim as Chair of the Senate Investigation Committee into the 2001 California Energy Crisis.

California Lawyer Magazine labeled Senator Dunn as “the Man Who Cracked Enron.” Between 2006-2014, Senator Dunn served as the CEO for both the State Bar of California and the California Medical Association.