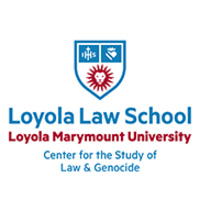 When It Can't Happen Here: Genocide in an Age of Nationalism

For anyone who remembers the nationalist-driven violence of the 20th century and fears its return, this resurgence of global nationalism in the 21st century creates concern. Without scrutiny and attention, the harmful developments transpiring in our midst may once again lead to mass atrocities and genocide. Understanding the connections between nationalism and genocide is fundamental to our prevention of such harms.

The Center for the Study of Law and Genocide at Loyola Law School invites you to join us on February 28, 2020 our spring symposium, titled “When It Can’t Happen Here: Genocide in the Age of Nationalism.” The symposium will facilitate an interdisciplinary discussion with two panels and a keynote speaker, to explore the connections between nationalism and extreme violence, as well as how to prevent it.